Scientist Who Loses His Wife To Cancer Invents “Diagnostic Breathalyser”

After losing his wife to cancer on Christmas Day, scientist billy Boyle vowed to do all he could to help others who could be saved by an early diagnosis.

And now, less than two months later, a cancer detector that Mr Boyle invented will be trialled on the NHS – potentially saving up to 10,000 lives.

His breathalyser – which sniffs out chemicals associated with a number of cancers, including lung and bowel – will be used in two hospitals this summer as part of a £1million clinical trial.

His wife Kate Gross – who had a successful career as an adviser to Tony Blair and Gordon Brown before founding a charity in Africa – died on Christmas Day last year aged 36 after a two-year battle with colon cancer.

Mr Boyle said the loss of his ‘inspirational’ wife and the mother to his five-year-old twin boys had spurred him on to helping others be diagnosed and treated early.

‘Because of the experience of my wife and my family, we saw the devastation that cancer brings to families,’ he told Sky News.

‘You develop technologies for a reason. Sometimes it’s for monetary gain. Other times it’s to make a difference. And I think we have a real opportunity to try and improve the lives of patients.

‘When my wife was sick, we talked about what motivated her, what motivates me. Knowing the conversations I had with her about how we can develop technology for the benefit of other is something that makes me walk into the office everyday. It puts an extra spring in my step.’

The LuCID (lung cancer indicator detection) project he has helped develop analyses the chemicals present in a person’s breath. 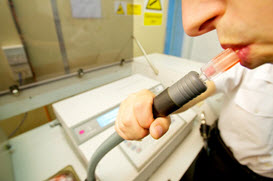 Diseases such as lung cancer produce miniscule but unique chemical traces. This can indicate illness long before symptoms become obvious, boosting the chances of survival. The survival rate for Stage 1 lung cancer is 75 per cent – for Stage 4 it is just 5 per cent. Mr Boyle said his goal is to save 10,000 lives.

Dr Jonathon Bennet, a consultant respiratory physician at Glenfield Hospital, Leicester, told Sky News: “If successful, this test could be delivered locally – for example at GP surgeries and pharmacies for people assessed as being high risk. We are looking forward to answering this question with this innovative study.’

Miss Gross wrote a poignant blog about her illness, which has since been made into a book entitled Late Fragments: Everything I Want to Tell You (About This Magnificent Life). On her final blog post, entitled ‘May Your Days Be Merry And Bright’, she said she was preparing to enjoy her last Christmas with her family. Her mother, Jean, said her daughter died with her husband by her side, just minutes before her sons asked if it was time to open their stockings.