Pharmacists – A ‘hidden Army’ that could reduce GP waiting times

Charlie Cooper writing in the Independent Daily Briefing – Patients visiting their GP surgery with long-term health problems such as asthma and high blood pressure could be given an appointment with an in-house pharmacist instead of a doctor, according to radical proposals to bring down waiting times.

Many GP  surgeries already have pharmacy counters, but under the new proposals, pharmacists themselves would take on a far more hands-on role in running the practice, and even consulting patients.

The plan, announced today by the Royal Pharmaceutical Society, would see pharmacists take control of a GP practice’s medicine stocks and liaise with local hospitals and care homes about prescriptions. 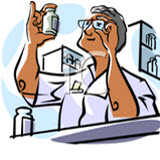 They would also relieve pressure on GP waiting lists by seeing those patient whose main reason for visiting was to get repeat prescriptions.

This could include large numbers of patients who have already been diagnosed with a long-term health condition, such as asthma, high blood pressure, diabetes or heart disease.

NHS England welcomed the “ideas” which it said complemented existing plans to increase the GP workforce.

A chronic shortage of newly trained GPs, coupled with a growing wave of retirements, mean that surgeries around the country are understaffed, despite the NHS recently singling out general practice as a key area with a £1bn funding boost.

By contrast, there is a surplus of pharmacists – health professionals who must train for five years, and some of whom are qualified to prescribe medicines.

GP waiting times remain a live political issue, with the RCGP estimating that there will be 67 million occasions in 2015 when a patient will have to wait a week or more to see their doctor or a practice nurse.

While there is no timescale to the proposals, the RCGP said that practices should start recruiting as soon as possible,. with a vision for every GP practice to have a pharmacist on staff within five years.

Dr Maureen Baker, chair of the RCGP, said the “hidden army of highly trained pharmacist” could be a solution to the GP workforce crisis.  As well as seeing patients, she said the expertise of pharmacists could help GP practices’ avoid purchasing more medicines than they needed, freeing up funds for better patient care.

“Pharmacists are an untapped resource and they will often know the patient better than the GP – especially those with long-term conditions,” said Katherine Murphy of the Patients Association.

There are more than 65,000 GP’s registered in the UK (around a quarter of all doctors) but the profession is still under-staffed. GP’s are trained to have as broad a medical knowledge as possible and need to build strong relationships of trust with patients.

Pharmacy involves the preparation and dispensing of medical drugs. Pharmacists play a major role but often forgotten role in healthcare, with 1.6m people visiting pharmacies in England each day. Pharmacists work in community dispensaries, but also in hospitals and in GP practices.

Four years at an approved school of pharmacy followed by one year’s work experience in a clinical setting. More experienced pharmacists can gain additional qualifications that allow them to prescribe drugs.

“Will this happen? – Don’t bet on it just yet. To integrate these proposals into primary care would take quite a few years and in the coming years there are going to be upheavals as healthcare funding is starved and there is a seemingly unstoppable drift towards privatisation. “