A crisis-hit NHS hospital has had Army medics treating patients.

Patients were shocked to see the troops on duty at St Mary’s Hospital in Paddington, London, last month. 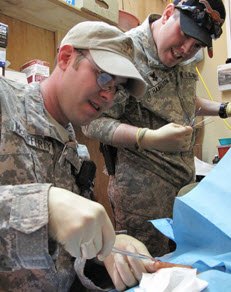 Last year the hospital’s A&E department was described as being at “maximum  capacity”.

It struggled to hit waiting times for 13 weeks in the run-up to Christmas.

One patient said: “I was really surprised, it’s not every day you get the Army helping out at hospital.

“It’s worrying if they are there because there aren’t enough doctors.”

But health chiefs denied the Army medics were there to help with staff shortages.

An NHS source said it was part of a trial between the NHS and the Ministry of Defence to help train troops, they said the scheme  – called LIVEX – will help Army medics gain experience of real-life trauma before being deployed on the battlefield.

The medics spent a week at trauma centres at St Mary’s and the Royal London Hospital.

A Ministry of Defence spokesman said the NHS and the Army could both benefit from the knowledge-sharing scheme.

He added: “Members of the Defence Medical Services have recently undertaken a week in two London major trauma centres as part of their training.

“Events such as this are crucial to ensuring that skills developed during recent operations are not lost during periods of contingency.

“It is important that military medical staff receive training relevant to their operational role and this is best achieved in a major trauma environment.”

St Mary’s has been under pressure from a surge in patients after the  A&E department at nearby Hammersmith Hospital closed in September. Last week it emerged shortages across the NHS forced bosses to recruit 3,000 doctors from abroad over the past year.

It is not the first time troops have worked in NHS hospitals. Stafford Hospital drafted in Army medics to help in A&E during a staff crisis in 2011.

And soldiers helped out at Royal Liverpool Hospital during a strike by NHS staff last year.

A spokesman for Imperial College Healthcare NHS Trust said the exercise had “provided an opportunity for military personnel to sustain  and enhance their current skills to deal with serious injury in a live setting under guidance from our own doctors and consultants.”

He added: “As well as providing the learning environment for our military colleagues to sustain excellence in trauma care when on operations, this provided an opportunity for both teams to share ideas, opinions and experience so we could learn from each other.”