Several daily newspapers have, today, highlighted the delays in admitting patients to hospital from A&E because of a shortage of beds. This is leading to “hundreds of deaths per year” in the UK, the royal College of Emergency Medicine has warned.

In a new report on the growing problem 0f “exit block”, the RCEM said that for every department seeing 50,000 patients a year, exit block accounted for 13 deaths.

Extrapolated nationally, this level of mortality would suggest up to 3,800 people may have died as a consequence of exit block in England in the past year. Exit block increases the length of a patients stay in A&E and can delay critical interventions such as antibiotic administration and pain relief. It also means A&E stay at capacity for longer and cannot treat new arrivals, extending waiting times.

The causes of exit block are complicated, but the problem is exacerbated by delays at the “back door” of hospitals, where patients, usually the frail elderly, who are medically well but require long-term care often have to wait to be discharged into the community.

Around 1,000 avoidable deaths occur in the NHS in England each month. While not all deaths by exit block are necessarily avoidable, the RCEM sad any initiative to reduce mortality must also address exit block, which it said “accounts for hundreds of deaths per year”.

A Department of Health spokesman said its target was to cut the number of avoidable deaths in the NHS by half in the next three years.

“The situation in at least one A&E has been tackled by hiring a private firm to get people home. The hypocrisy of this is that the NHS is forking out a fortune for a private company to hire the  care staff to get and keep people home, when it should be doing it ‘in house’ . It shows the state our NHS is in when getting people home through a third party is needed. The implications of this… well think about it.” 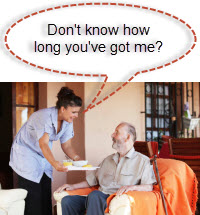