How health care is funded

The NHS is experiencing the longest and most severe slowdown in funding in its history. This has raised questions about the sustainability of its funding model.

The way that health care is funded varies between different countries. Here we explain the main models used to finance health care: taxation, private health insurance and social health insurance. We outline how each model works in its purest form, while recognising that most countries typically pay for health care using a combination of methods.

We also cover user charges. Although no European or OECD (Organisation for Economic Co-operation and Development) country relies on user charges as a primary source of health care funding, all countries incorporate at least some element of user charging into the funding mix.

We do not consider how social care is funded; in England, health and social care are funded separately, while the definition of social care varies between countries, making comparisons difficult.

How is the NHS in England currently funded?

The NHS is funded mainly through general taxation supplemented by National Insurance contributions.While the NHS is generally described as being ‘free at the point of use’, patients have been required to contribute towards the cost of some services (eg, prescriptions and dental treatment) since 1951. Exemption arrangements are in place that cover many patients, including those aged under 16 or 60 and over, as well as recipients of specific state benefits. The exemptions in place resulted in 90 per cent of all prescription items in England being dispensed free of charge last year (Health and Social Care Information Centre 2016). 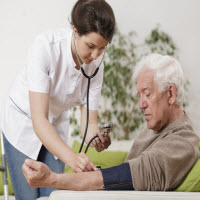 The relative contribution from each of these sources of finance – general taxation, National Insurance and user charges – has fluctuated over the years (see Commission on the Future of Health and Social Care in England 2014b). For example, the proportion of income from user charges, from a high of 5 per cent in 1960 remained at 1.2 per cent between 2007 and 2011 (Hawe and Cockcroft 2013).

Across the UK, private health insurance policies are held by 10.6 per cent of the population. Most of these are corporate subscriptions, offered to employees as part of their overall remuneration package (LaingBuisson 2017).

How does it work in principle?

Taxes vary according to:

How is this model applied in practice?

Australia, Canada, New Zealand and the Nordic countries are some of the other countries that rely mainly on general taxation to fund health care. However, no country relies on general taxation alone; they may also have user charges or elements of private insurance. For example, in Canada, about 70 per cent of health spending is publicly funded though taxation, with the remaining 30 per cent largely accounted for by out-of-pocket spending (costs borne directly by patients) (14.6 per cent) and private health insurance (12.2 per cent) (Canadian Institute for Health Information 2016).

Methods of levying tax vary considerably between different countries, particularly whether they are raised by central or local government. In Sweden, for example, public funding for health care comes from both central and local taxation. In 2013, local taxes accounted for 68 per cent of county councils’ total revenues, 18 per cent came from subsidies and national government grants financed by national income taxes and indirect taxes (Mossialos et al 2016).