Alan Bannister, 56, claimed he was in constant pain, struggled to get dressed and took 15 minutes to walk 50 yards.

But after a tip-off, Bannister was secretly filmed launching a 240 yard drive from the first tee and walking towards the 18th hole four hours later. 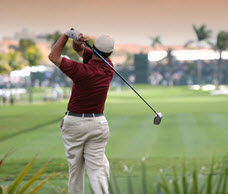 The former mechanical engineer drove to his twice-weekly games in a car provided by the Motability scheme.

Bannister of Barry, Vale of Glamorgan, was found guilty of fraud at Cardiff Crown Court and will be sentenced on March 24.