A DRUG dealer who peddled cocaine using his disabled mother’s taxpayer-funded Motability car has been jailed.

Wayne Elphick, 43, cruised the streets looking for clients in the specially adapted Seat Leon – which was bought with a government grant to help his 64-year-old mother Patricia get around.

Police stopped him near his home in Moston, Manchester, in October last year and discovered £550 worth of cocaine hidden in his underpants. They also found £272 in cash. 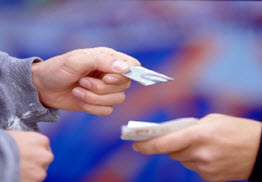 Officers subsequently raided the house Elphick shared with his mother and found £900 worth of cocaine, scales, a drug debtors list and £290 in cash.

Elphick admitted cocaine possession with intent to supply and was jailed for two-and-a-half-years. He had initially claimed the drug was for personal use, Manchester Crown Court heard.

Det Sgt Andrew Buckthorpe, of Greater Manchester Police, said Elphick was ‘thumbing his nose at both the law and the good faith in which that car was provided to help his ailing mother’.

“It would be very surprising if this was the only instance where a Motability vehicle was being used for nefarious activities.”