Care homes’ charging pensioners’ families for care that should be free

A charity has called for top-up fees to be ‘optional, affordable and transparent’, after finding many families are subsidising the cost of their relative’s care home when it should be free.

Families can choose to pay top-up fees on top of what the local authority pays so their relative can have a nicer room in the care home or live in a more expensive care home.

However recent reports such as one by the Local Government Ombudsman last year claim councils are asking for top-up fees to cover the basic care for which the local authority is responsible and so filling the gap in their social care budget. 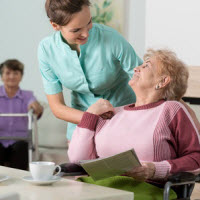 Rules around top-up fees were tightened last year to protect families as part of the Care Act, but Independent Age found nearly half (43 per cent) of councils who answered a Freedom of Information request are ignoring these new rules.

Families making up the shortfall in care budgets

“Too many care homes are charging pensioners’ families for care that should be free, and too many councils have been turning a blind eye to the practice,” said Janet Morrison, chief executive of Independent Age. “The Care Act was intended to stamp out this abuse but it is clear from our research that it is still going on.”

She added: “We understand that councils are under huge financial pressure. But in a drive to find savings to social care budgets, they must not pass the burden of this ‘secret subsidy’ on to the families of poorer pensioners.

“It is only poorer pensioners who qualify for a local authority funded care home place, and yet it is their families that are being asked to make up the shortfall in care budgets. We hear all the time from families who are willing to do anything they can to ensure their elderly relatives get decent care, even if they’re struggling financially themselves. That’s why it’s so important that there are rules to make sure they do not feel pressured into paying fees unnecessarily.

“Top-up fees must always be optional, affordable and transparent. The rules introduced by the Government should ensure that is the case. So it is very worrying that so many councils are still failing to follow these basic principles.”

Councils not complying with Care Act

Independent Age found that for the period April to June 2015, 43 per cent (53 out of 122 councils who responded) did not comply with at least one of the requirements stipulated in the Care Act which came into force in April 2015 to:

It’s estimated that almost 50,000 older people in England have a ‘top-up’ paid towards their care costs by a relative, ranging from tens to hundreds of pounds every week.

The new findings come as social care budgets are under pressure as never before. The Association of Directors of Adult Social Services estimate that councils have faced reductions of £4.6bn to adult social care budgets since 2009-10 – almost a third of net real terms spend. And while local councils on average pay £512 a week towards a care home place, analysts estimate that the real cost is between £554 and £625 a week.

Janet Morrison, chief executive of Independent Age, said: “The findings do suggest that there has been some progress since the introduction of the Care Act. A total of 48 per cent (58 out of 122) of local authorities have written agreements in place for all top-up fees entered into since April 2015. Whereas in 2013, only 28 per cent even had information about all top-up fees in their area, according to previous research by Independent Age.”

This week, the Local Government Ombudsman warned councils that they must offer affordable care options when arranging care homes following the case of a family that was wrongly left to pay top-up fees for three years.

The Local Government Ombudsman (LGO) said Solihull Council had provided ‘insufficient information’ to the family when they were attempting to organise care for their father.

The council had contacted 13 nursing homes but only found one that would accept its standard rate. This home did not have any vacancies. ‘When the council decided the man needed to live permanently in a nursing home it again failed to help the family find a home that did not require a top-up,’ said the LGO’s report.

The family were forced to continue to pay the top-up fees even when they later told the council they were struggling to afford the payments. The council has since offered to refund the top-up paid by the family up to when their father went in to permanent care in October 2007 but does not accept responsibility for payments made after that date.

Dr Jane Martin, Local Government Ombudsman, said: “When arranging care, councils must offer families an affordable alternative to a placement which requires a top-up fee. If no placements are available in their area that do not require a top-up then councils must fund the top-up themselves.

“In this case, no affordable placement was offered and the family was not made aware that such an alternative should have been available to them.

“I would urge Solihull Council to act upon my recommendations and consider the lessons from our focus report.”

“A warning for families!!”