A lav affair: do we care enough about public toilets?

Deborah Fenney writing at The King’s Fund: When was the last time you used a public toilet? Not in a train station or a shopping centre bathroom – a local authority-maintained, public facility? For most of us, this is likely to be an increasingly rare event. Local authority spending on public toilets in England has declined by 50 per cent in the past 10 years and recent BBC analysis showed a significant drop in the number of public toilets across the UK.

While anyone can find themselves ‘caught short’, for some people this happens more than others. Women have more reasons and take longer to use a toilet than men, for example due to periods or pregnancy, and the lack of equality in toilet provision for women is well-recognised. For people living with bladder and bowel conditions, lack of facilities is a major concern. And if the toilet isn’t accessible then the impact is the same as no toilet at all. Transgender and gender non-conforming people, sometimes denied access or harassed in public toilets, may avoid them due to safety concerns. Additionally, disabled people frequently encounter inaccessible toilets, including those that are intended to be accessible. This is also about the infrastructure around the toilet, for example the signage and general accessibility of the building. 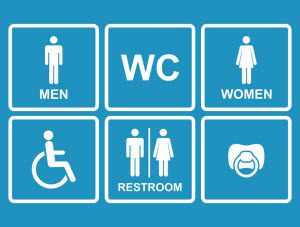 This issue is not yet getting the attention it deserves. Talking about toilets tends to provoke discomfort: for a variety of social and cultural reasons people are often reluctant to talk openly about toilets. But going to the loo is a universal human need, and the facilities available to us can have a significant impact on our health.

At an individual level, there are physical and mental health consequences when adequate public toilet facilities are not available. People report dealing with a lack of access to toilets by restricting fluid intake and ‘holding on’, leading to risk of dehydration, UTIs and potential kidney damage. For some disabled people, the lack of accessible toilets has led to otherwise preventable surgical interventions. There are also social impacts, where people are forced to plan ahead and restrict their outings to places they feel confident they will find a toilet. Others simply don’t go out, putting them at risk of social isolation.

A lack of adequate public toilets will therefore affect public health interventions that encourage people to go out and about locally, for example to increase physical activity and reduce obesity. Public toilets are a key part of our built environment and thus part of its impact as a wider determinant of health, an important feature of the places we live in, and having an influence on our health behaviours and lifestyles. It therefore makes sense that adequate public toilet facilities are part of efforts to improve population health.

In looking at this topic, I was struck by the number of organisations and campaigns calling for more and better public toilet provision, set against the steadily decreasing funding in local authorities. No one body holds overall responsibility for public toilets, and there is no compulsory provision in legislation. Campaigns have led to some additional national funding for Changing Places toilets (those with more space and equipment such as hoists) in sites such as motorway service stations and hospitals. With the exception of this, however, there appears to be very little activity on a national level from the relevant departments. There does not seem to be a coordinated approach to addressing the reduction in public toilet facilities across the country. This seems like a missed opportunity to address an issue with a significant health impact.

Many local authorities have looked for alternatives to publicly maintained facilities, for example, community toilet schemes where businesses make their toilets available for the public in return for a financial incentive from their local council. However, several researchers in this field have raised concerns that these schemes are not adequately accessible and do not meet the needs of a diverse population that includes people from different religious backgrounds, people of different ages and homeless people. There is a question of whether we need more toilets or more access to those that already exist – but there is little argument about the inadequacy of current provision.

All of this has prompted my interest in the role the health sector might have to play in supporting public toilet provision. I’m also keen to hear if the issues raised here reflect experiences of readers and I‘d be interested to know if there is anywhere public toilets are thriving. The Royal Society for Public Health is shortly releasing the findings of a survey that will give further insight into public toilet access across the UK. Researchers in urban planning and disability studies have created various guides for good practice in toilet provision. Ensuring public toilets are consistently on health agendas would seem to be a key part of ensuring decent access for all.